Spending quality time in London with my teenage niece, Charlotte.  Five Ways To Talk Teen  My niece Charlotte, now fifteen, has taught me a lot about how to talk to a teen. Here are some tips for parents and other befuddled adults:  Keep your eyes on the prize. What’s your goal? What is the one… 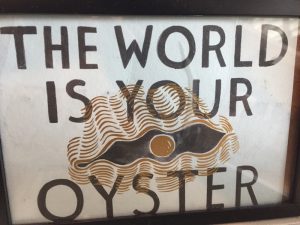 There is nothing more frustrating than not being able to remember someone’s name. This is a challenge for many people, present company included. Some consider remembering names an art, and an art it is if you’re in the business of sales—recalling names is a large part of your job. Saying a person’s name when you are dealing with them is the key to establishing business relationships. There’s a reason why name tags are issued at most business functions.

When Your Candidate Loses 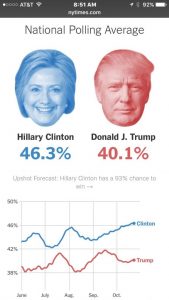 The inglorious TV election drama has finally ended. In Left Coast San Francisco, a post-election pall of fog hangs over our city, much like the hanging chads of 2000.

We finally have a president-elect, but he might not be the one you wanted. Now what? A basic rule of etiquette is to never discuss politics or religion at social events, and this election proved why: polls showed that 48 percent of the voters felt disenfranchised by both candidates. It’s no wonder that post-election rhetoric remains strong.

On November 8, it was the people’s choice, and the people chose Donald Trump. It was the biggest political upset in history, and it’s has been hard for many to come to grips with the outcome. But many voters clearly wanted a change, and Trump was the change candidate.

As one proud immigrant recently shared with me: “America is so prosperous. Through every election cycle we go through a mini cleansing. 2016 is no different, but we must unite for the good of the country.”

Real & Simple No. 4: Answers to Your Most Basic Etiquette Questions

List No. 4 of my “most asked” etiquette questions will help you solve more of those pesky dilemmas about dining, communicating, and other puzzling social interactions. • Does the napkin go in your lap the minute you take your seat? If there is no host, yes. If there is a host, wait until that…

Real and Simple No. 3: Answers to Your Most Basic Etiquette Questions

Real and Simple No. 2: Answers to Your Most Basic Etiquette Questions

Number two on my list of most asked etiquette questions includes both business and social quandaries and how to address them. Here are more answers to help you navigate the modern world gracefully. • Is the continental style of eating (fork in the left hand, knife in the right if you’re right-handed, and the…

Real and Simple No. 1: Answers to Your Most Basic Etiquette Questions

Oprah may have her list of favorite things, but I have my list of “most asked” etiquette questions. If you want to be in the know, or simply want to know the right thing to say or do in different situations, life just got that much easier. • If I am at at a…

From Emoticons to Emoji: The New Punctuation

If you can say it with a ? or a ?, why not? Less is more, especially with texts, which are meant 2 b short. The great advantages of texting and email are the three e’s: They’re easy, effective and effortless. But the downside of electronic messaging is the lack of nuance. Oftentimes, without…

When communicating with others in the business world, be sure what you say and write has impact. Here are tips for both verbal and written communications. Verbal Communication • Speak clearly (don’t mumble) and loud enough (but not too loud), while standing or sitting up straight and looking your listener in the eye. • Make…

The Power of No

“I’m as proud of what we don’t do as I am of what we do.” —Steve Jobs No. Nyet. Non. Nein. No matter you say it, the meaning is still the same, but this tiny word can be very hard to say. What is it about the word no that makes us feel uncomfortable? If…