My sister Alli was involved with an organization called BayKids Studios.  They are charged with empowering children with serious illnesses and express themselves through the power of filmmaking.  As their mission states, “Instead of children with illnesses, they become kids with cameras and stories to tell.” I signed up on the spot, especially when I found out the annual fundraiser involved movie themes.  Since high school I have loved film, and I went to the movies almost every Friday night with my best friend Katina in Sacramento.  Whatever allowance I had earned for the week was all but gone after the movie ticket, popcorn, and a diet coke. 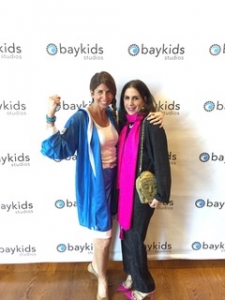 Each host and table guests were charged with creating a memorable table from nuts to bolts, from a movie theme complete with design and décor of the table and guests.  After each table was created, the panel of judges presented awards in three categories, then the fun began. 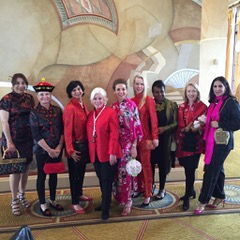 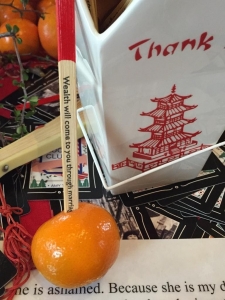 The first step was to organize a table of supporters.  That didn’t take long when I told them the cause was for sick kids. Next came the movie, but which one?  My favorite author is Amy Tan who lives in San Francisco, so our movie theme became The Joy Luck Club.  If you haven’t read the book or seen the film, add it to your queue. Our home in the city is near Chinatown and it’s literally my other home away from home.  I know every inch of Grant Avenue and beyond. Not much has changed in my favorite historic alley called Waverly Place, except for a new upscale Cantonese American restaurant called Mister Jui’s. 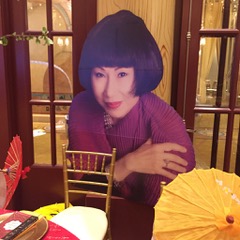 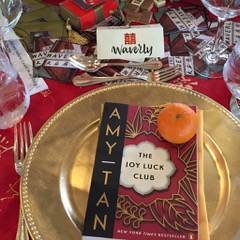 I reached out to an editor friend I had met a few years back named Sam Barry.  A talent in his own right as an author and musician, Sam was in a band called The Rock Bottom Reindeers, a charity band with many notable members including his brother, humorist Dave Barry, and authors such as Stephen King, Scott Turow, Mitch Albom, and Amy Tan.  With his help, I was able to get the author to personalize each book for my guests. I couldn’t wait to surprise everyone with this special gift! 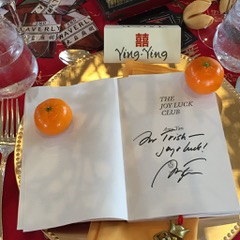 Next was to get my hands on as much Asian décor as I could find.  This was easy because San Francisco has the largest Chinatown in the United States.  I love Asian everything, and I’m positive I was Chinese in another life. In fact, our former home in San Francisco had quite a bit of Asian art, and we ended up selling it furnished to a family from Hong Kong because they loved our Feng Shui.  Let’s hope I could work the same magic at BayKids as I did at home. 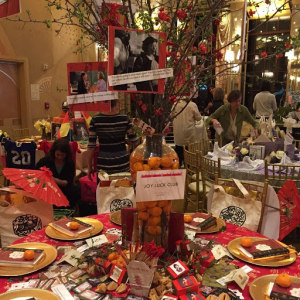 Every culture has their symbols of good luck, but the Chinese truly believe that it will bring them good fortune.  To that end, I began translating our décor to their lucky terms such as ‘auspicious’ and ‘happy’ with colors and numbers, as well as animals of their Chinese zodiac.  The red and gold colored table cloths was blazoned with Chinese characters, and the centerpiece flowers were Chinese plum branches (which symbolize perseveres and hope) with a mandarin orange column glass vase.  Lucky money cards hung from the tree with some of the memorable movie quotes.  Each of the characters from the book came alive, from daughters Waverly, Rose and Lena, and their mothers June, Suyuan and Lindo. I had all of their faces blown up on black and white poster boards and they became the backdrops for each guest and their place setting.  The table was covered with mahjong sets and fortune cookies, silk parasols, Chinese calligraphy place cards with good luck symbols, and porcelain Chinese take-out holders with chopstick fortunes. The Tan autographed books were icing on the Chinese sponge cake, not to mention the life-sized step and repeat of the author who loomed large over our table. The Chinese determine one’s zodiac sign by year, whereas in the western world it’s done by month. 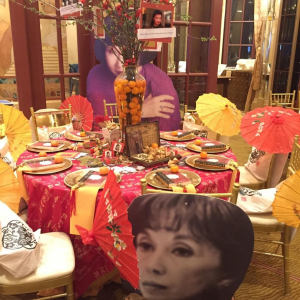 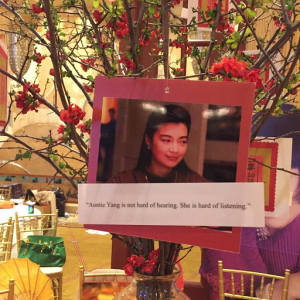 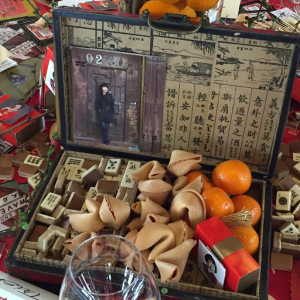 Our table won third place, and I created a special award for the best dressed at our table.  She’s pictured wearing the Chinese hat. 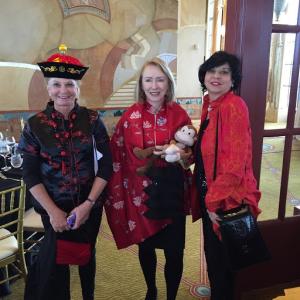 Since 2000, BayKids has turned small patients into filmmakers. Last year alone they raised over $200,000 at one fundraiser, and have helped over 6,500 children experience the joy of creative expression through filmmaking. Here’s to lights, cameras, and the action of healing children! 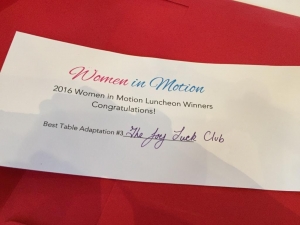 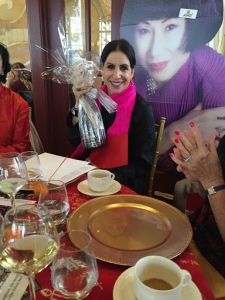