I’m no stranger to ballparks. My father is a baseball devotee. First with the Oakland A’s as Oakland was closer to our home in the Central Valley than San Francisco. If I had only kept my “Campy” Campaneris trophy from “Bat Day,” it would have made a lovely family keepsake. Vida Blue, Catfish Hunter, and Reggie Jackson were my weekend heroes as my parents had no sons. A day at the ballpark with his eldest daughter when Charley Finley owned the team in the 70’s was the perfect day. Although baseball games are for fun and entertainment, there are some etiquette rules that should be followed. 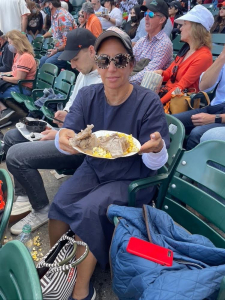 Trash it or leave it at the ballpark? Choose wisely.