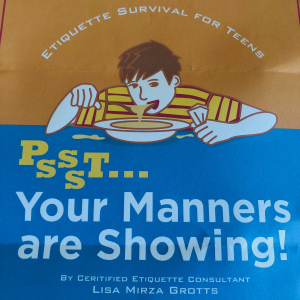 This was the title of my teen etiquette class that I taught at the San Francisco Midweeklies, a finishing school for 6th and 7th graders.

From the classroom to the boardroom, the same rules of civility apply. Yet today, civility has been replaced by a blatant lack of manners which has become all too commonplace.  Last weekend Elton John performed at the new Chase Center in San Francisco.  During the concert, the “rocket man” made reference to our impolite society and how we all need to get back to kindness versus rudeness.  We’ve heard it said: “There’s no need to be rude.” It’s okay to speak your mind, but it’s not okay to be unkind.

When people text or talk in social settings, often they don’t even realize they’re being rude. We live in a world of no boundaries, especially when it comes to hand-held technology. Common courtesies have toppled in the age of rudeness.

It’s easy to write about bad behavior when you’re in the business of observing. I have enough content to last me for a lifetime, but the following examples are standouts. I share them now as examples of how not to behave:

Gadget Gurus. We live in the world of a new generation, and just as it evolves, so do the rules. But the rules of civility shouldn’t disappear simply because we carry mobile devices. Talking or texting on your phone while you’re in line or checking out at the grocery store is a no no. (Some stores have signs at the counter asking people not to use their cell phone when checking out.) Paying your bill should be the focus, not being oblivious to the checkout person or people in line behind you. It’s inconsiderate. The only reason for you to be on your phone is for Apple Pay, which can be efficient but only if you are. Pay now, talk later.

Dog Poop: It happened to my husband. We saw our neighbor’s dog pee in front of our front door and it attracted other dogs. When he confronted our neighbor she became very defensive and said that her dog could not help himself. Who’s in charge? The fact that she couldn’t simply apologize and say she would try to keep it from happening again was what was disappointing.

When to Engage. In 2010, I was interviewed by the New York Times on an article they were writing about a person who was walking around correcting street manners. It was easy to refute why this was not okay. I ended up writing a piece about it called “Minding Other People’s Manners: When and How Is It Okay?” http://www.lisagrotts.com/minding-peoples-manners-okay/  My feelings remain the same: Pointing out someone’s social errors is bad manners unless it’s something that directly affects you, such as someone cutting in front of you in line or talking so loudly at the movies or a concert that you can’t hear the show.

A Tale of Two Texts. I was recently checking out at the grocery market and the checker was texting. I asked her if it was okay with her boss to use her phone while on the job. Her response was, “Does it bother you?” I told her it didn’t bother me, I just didn’t think that her boss would appreciate her using her mobile phone on the job. She seemed shocked that I even brought it up, yet I was the one stunned that she thought it was okay to text while on the job. I’m sure I’m not the only customer who would be bothered by her doing that.

Emily Post is always my go-to source for etiquette rules, and this quote sums it up nicely:  “Manners are a sensitive awareness of the feelings of others. If you have that awareness, you have good manners, no matter what fork you use.” The key word here is awareness. Be conscious and aware of others as much as humanly possible.