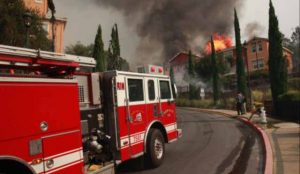 The best portion of a good man’s life is his little, nameless, unremembered acts of kindness and love.

There’s nothing like a crisis to bind people together. The fires were a catastrophic blow to our communities, with an estimated six thousand homes and businesses destroyed. We owe a debt of gratitude to all of the first responders who have been working day and night to save our beautiful county. At one point early in the week, some of us residents of Healdsburg found ourselves at the same restaurant in Geyersville. This town was deemed safe, at least for one night, and it became a gathering point. We had moved from coffee to cocktails. From table to table we went, sharing stories of our friends and neighbors, hugging one another.

For one week, my family and three evacuees (including three dogs and a parrot) spent the bulk of each day waiting for Nixle reports, a public-safety communications agency for emergency notifications. It was nerve-wracking, but time passed quickly. There were Cal Fire press conferences to listen to on the radio (Thank you, KSRO). With no power or internet, our only means of communication was text messages, which went to and from concerned family members and friends day and night. It was somehow comforting to find myself so attached to my iPhone, though not in a way I had ever imagined. Cell phones were a lifeline for everyone who still had phone service.

What No One Tells You

As a part-time Sonoma County resident, my heart is broken by the loss of life in and around our neighboring communities. The wildfires burning in Northern California have forever changed our landscape. One gust of wind, one spark of an ember, and everything went up in smoke. How will we ever be able to thank all of the firefighters who have come from near and, by last count, as far away as Australia? This catastrophe taught us all to think on our feet so we can respond when the unexpected happens next. Out of falling ash, many stories of faith, hope and sadness have sprung: A friend’s son and daughter-in-law had to flee with their children in the middle of the night with only their phones; on Mark West Road in Santa Rosa, a former San Francisco mayor’s home went up in flames, as did a local vintner’s; in Chalk Hill, a vigilant homeowner helped guide Cal Fire to hot spots while he sent his family away to be safe; and it was touch-and-go for friends in Calistoga who evacuated only to find that their ninety-year-old mom had simultaneously been evacuated from her senior community in Santa Rosa, which no longer exists.

The stories go on, and I was touched by the many who used Facebook as a means to vent and share: From San Francisco: “It’s not just physical houses; it’s their families’ camaraderie, laughter, and memories. But luckily their lives are safe and new memories can be re-created. With time. Hopeful for that.” From Healdsburg: “I haven’t packed anything because I honestly can’t think of anything I can’t live without. My passport? The only thing that matters is that we have a home. The rest are just things. I cry for my friends and neighbors who have lost their homes. Being displaced is so incredibly hard.” From Napa: “Getting gas this morning, a fire truck was doing the same. They came all the way from Wyoming to help. The firefighter said it was an 18-hour drive but they were happy to be here helping. He said they anxiously waited for a couple of days until they got the green light to come out. So thankful.” From Sonoma: “North Bay Fires volunteer update: Spent the morning and afternoon in Petaluma, Novato, and San Rafael at several shelters. The smoke haze is pretty unreal, but the human resolve and people coming together is what stands out.”

Love Is Thicker Than Smoke

October is also harvest time in the wine country. The fragrance of ripened grapes has been replaced by the smell of smoke, and the air is also filled with the sounds of helicopters and aerial firefighters dropping fire retardant. The air quality has been compared to that of Beijing, China, with air masks flying off the shelves since the firestorm began. But one thing’s for sure: the love in the air is thicker than the smoke.

We hear this all the time, but it bears repeating: We get when we give, so as we approach the season of giving, don’t think twice about helping someone in need. If there was ever a time to follow the golden rule, it’s now. If you have a home to go back to, then you’re luckier than your homeless neighbor. If your compassion runs dry, think of all the displaced persons and the countless firemen and unsung heroes who have helped us.

Homeless is a term familiar to San Franciscans; we see homeless people on the streets on a daily basis. For the first time in my life, I now personally know homeless families, which is shocking and above all, sobering. We are all one degree of separation away from someone who has lost his or her home. Most of us were caught off guard late Sunday night. Now is the time to prepare for the next natural disaster. Don’t wait to safeguard your home and your loved ones.

· Firearms. Guns are the first things vandals look for.

· Cash: ATM machines may not be working. Keep a stash of small bills and change for laundry or newspapers.

· Tool kits: A hammer, screwdriver, knife, etc., or at the least a Swiss army knife.

· Family heirlooms and photos: Think CDs or flash drives, which are easily transportable.

· Family pets: Make sure you have a cat carrier and leashes and collars for dogs.

· Horses and farm animals: Have an emergency evacuation plan for your animals.

· Gas and water: Turn them off, especially the gas.

· Electrical panel: Switch to off.

· Computers: Shut them down, then unplug them.

· Lights and appliances: Unplug everything except the refrigerator, freezer, and a lamp.

· Doors and windows: Lock them and hide a key for emergencies.

· Roof and surrounding brush: If time permits, water them down with a hose.

· Blinds and curtains: Close them. If applicable, board up windows.