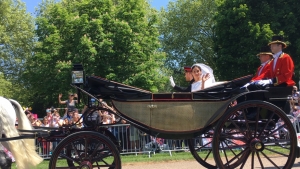 The Long Walk in Windsor Great Park.  I had a front row seat when the “newly” wed rode by.

Departure: With little sleep, lots of coffee, and a pillbox of Ambien, I was on my way, but not before running into a friend in the Delta lounge at 5 a.m. She was rolling in laughter when she saw that I was wearing my wedding fascinator. The laughter continued on the plane until a flight attendant offered to take it off my head. Before shuteye, I caught a glimpse of it being passed around the crew.

May 16: With my fascinator securely in place, I grabbed a cab to the Sloane Club in Chelsea. The sun was actually shining and my room was ready early. After a quick shower, I was off to seek out royal London. All major streets were flying Union Jack banners, from Oxford to Piccadilly. I popped over to the trendy Dean Street Townhouse in Soho where the happy couple had once dined. With a few hours to kill before dinner, I was off to Harrods to check out their wedding windows, only there were none. Clive the doorman, in slang unfamiliar to me said, “Darlin’, all of London has gone to Windsor.” Oh darn, I had time to shop before dinner. The 15,000-square-foot shoe salon is aptly named Harrods Shoe Heaven.  I picked up a pair of Charlotte Olympia’s with a gold bee motif. Like the British royals, I’m a pump girl, minus the hose.

May 17: My next stop was the iconic Tower Bridge, which was always a favorite when I spent my junior year abroad at Oxford. It was also a few minutes away from my interview with Pamela Harper, CEO of the luxury brand Halcyon Days, makers of hand-painted enamel boxes. The bespoke company holds all three royal warrants, which are seals of approval from the royal households. They supply Queen Elizabeth, Prince Philip, and the Prince of Wales—and have for over fifty years, which is very rare. By happenstance, Pamela and I met in India five years ago while I was shopping for her boxes in the hotel gift shop. I’ve been a 30-year collector of these precious boxes, which is my main obsession. Not clothes, shoes, or handbags: porcelain boxes that you do nothing with but admire. After a quick trip to Jermyn Street to pick up my husband’s morning suit and top hat for Royal Ascot in June, I had afternoon tea at nearby Fortnum & Mason. In the Diamond Jubilee Tea Salon, which is painted in a Tiffany hue, I sat next to a group of Jersey girls, who were in town celebrating the wedding. I had an interview scheduled with the wedding baker Claire Ptak, formerly of Chez Panisse in Berkeley and now owner of Violet Bakery in London’s East End, but it was canceled by the palace. So my next journey was to the National Portrait Gallery and to St-Martin-in-the-Fields to listen to classical music. Before heading back to the hotel, I had a late dinner at Rules, London’s oldest restaurant, in Covent Garden.  The couple sitting next to me was curious about my accent, and from that point on the conversation was all about President Trump.

May 18: In Windsor at last, but not before a blowout at Richard Ward in Chelsea, salon to Kate Middleton. My driver promised traffic, and sure enough, all roads leading to Windsor came to a royal standstill. Feeling anxious, the driver took me directly to the High (main) Street. The crowds spilled into the streets, and rumor had it that Prince Harry was going to do a pre-wedding walkabout. With little time to waste, I made my way to a press tent. When I flashed my NHG business card with a Union Jack lanyard, it took only one look at my Royal Correspondent title and I was granted access. I was escorted to the front gates of the castle, where I waited with reporters from all the major networks. Sharpshooters were in place, the castle police lined the streets, and out came a double treat: Princes William and Harry greeted the crowds with aplomb, with Harry showing no sign of nervousness.

That night, with my laptop in hand, I was off to my hotel bar, the De Vere Beaumont Estate near the River Thames in Old Windsor, where I shared a table with two hairdressers from a salon near Kensington Palace. They were charged with doing the hair of certain princesses early on the morning of the wedding but couldn’t disclose which ones.

May 19: At a wedding-breakfast meeting, I spoke with Dawn Hewitt, whose mental health charity for children is a favorite of Prince Harry’s. She was one of the 1,240 people chosen to watch the nuptials in the grounds of Windsor Castle that day. Over poached eggs on toast, we traded cards and I promised to put her in touch with my favorite charity, San Francisco Suicide Prevention. By the time I reached town, all roads leading to the castle were closed. The Long Walk in Windsor Great Park was the place to be to view the wedding procession. It had breathtaking tree-lined views, and luck had me standing in the front row as the royal carriage passed by. At the viewing stand was an American-sized TV so the crowd could see the royal passage in close-up, and it’s where I met people from all over the world: every color of skin and seemingly every nationality. As the carriage passed by, Ms. Markle made her British royal debut on the global stage.  You could see (and feel) the love on the faces of her and the prince, and the masses watching knew that a transformation was taking place in the royal family.

Back at De Vere, the guest energy was still upbeat seven hours after the ceremony. I enjoyed a pint of Guinness and a bowl of pasta with my newfound friends (BBC reporters and other hotel guests), then quickly fell into a carb coma in my room, only to be awakened a few hours later by music. At first, I thought I must’ve been dreaming, because I thought I heard Elton John (he was performing at the reception nearby). Wishful thinking. It was a wedding band in the hotel, with no end in sight. With no sleep in sight, I watched the wedding once again, this time on BBC, shed a few Lifetime tears, and talked to my husband, who was in Sonoma. He had wedding scoop: Flowers Pinot Noir from the Sonoma Coast was apparently served at the 200-person dinner at Frogmore House. I tried to get confirmation later but no one was talking. But they didn’t deny it, either.

May 20: The sun could not rise fast enough. Still on my wedding high when I arrived back in London, I jogged to my favorite newsstand in Sloane Square and spent the next four hours at the Sloane Club devouring the wedding news. From the Sunday Times to the Daily Telegraph, the headlines did not disappoint: “The Changing Monarchy,” “The Firm Rules,” “Royal Ever After.” Feeling grateful for the opportunity, I slipped into Holy Trinity Church on Sloane Square. After the service, I hit the streets with copious amounts of Sudafed to preview the RHS Chelsea Flower Show.

Going Home: Heathrow is one airport I don’t mind getting to early. After a relaxing breakfast in the Virgin Lounge, I befriended a gentleman who owned a hotel in Windsor (and lives in Palo Alto) where the press stayed (think Hoda, Oprah’s Gail, Savannah).  After doing the shopping loop (Fortnum’s, Harrods, Cath Kidston) for tchotchkes and leaving no coin behind for the latest Hello and OK magazines, my flight home was uneventful except that Robert Redford was seated directly behind me.

Every king needs a queen, and every prince a princess. There’s something altogether charming about Harry, and when he married Meghan, we were all treated to a double dose of red, white, and blue, and a double cup of “I do.” It was a day of fairytale moments, a box office mega-hit with two million viewers. The new duchess is now in a much longer-running show called the British monarchy. An ad for Amazon the day of the wedding read: “Alexa, tell me a story with a fairytale ending.” May their royal highnesses the Duke and Duchess of Sussex find their happily ever after.