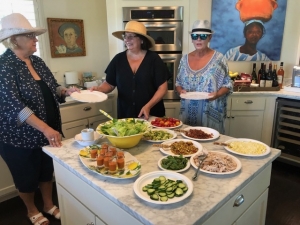 Potluck means sharing.  Sharing with my swim class friends.  I put together a soup and salad bar, and the others guests provided appies, drinks and dessert.

Seven-Up was once advertised as the “un-cola.” Today, a potluck host is more like an “un-host,” usually providing the site for a party or dinner but not all the food and drink. Potlucks have always been in style for small groups such as book clubs and larger ones such as community organizations, but today, they’re more and more welcome for holiday dinners such as Thanksgiving and Christmas, and even dinner parties for close friends, where everyone can be part of the gathering without placing so much responsibility on the host. With Labor Day around the corner, this is a holiday made for sharing.

Every guest at a potluck is expected to bring something to eat or drink. Whether you’re the host or a guest, follow these guidelines for a successful get-together.

Rules for the Host

Rules for the Guests