“The impossible cannot have happened, therefore the impossible must be possible in spite of appearances.” ― Agatha Christie, Murder on the Orient Express 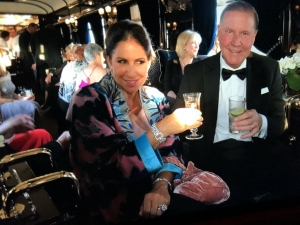 One year ago this month we traveled on the Orient Express from London to Venice. Cocktails in Bar Car 3674 toasting the “Guilty 12.”

Queen Victoria. Victoria’s Secret. Victoria Station. Nestled in the Belgravia section of central London, Victoria Station is a massive railway terminal connecting train lines and airports, a spacious city within a city. It’s also where the Belmond British Pullman train departs for the Venice-Simplon Orient Express train. Before boarding, I spotted a Shake Shack nearby. With a heat wave brewing in London, a frozen custard was calling my name until I spied a Pride shake offered for the month of June. I was tempted to buy it in honor of my San Francisco home, but ultimately I held out for a Champagne cocktail on the train.

Brunch in our Pullman car did not disappoint: a Bellini, fresh yogurt with English strawberries, eggs with Scottish smoked salmon, and you guessed it, English Breakfast tea. Dressed in my crisp Carolina Herrera white blouse, I was almost afraid to sip my coffee from the British-blue William Edwards china, as the ride was a bit bumpy. My first instinct was to ask for a straw until I realized that I was not in a Starbucks.

With one too many mystery series under my belt, I wondered if cameras were watching my every move. Without my ever having to ask, my water and wineglasses were instantly refilled. At one point, my fork flew to the floor due to a bump on the tracks, but it was replaced within 11 seconds. I counted. Service on board a train is no easy feat. There were five cars, 156 guests, and two small kitchens. The ride can be rocky and the aisles narrow, yet the wait staff managed to serve without a spill. #greatservicenoted.

“Start Your Holiday Your Way” read a billboard at the train station. But it was more like “start your holiday the French way”: delayed (the British love to blame everything on the French). The magical mystery tour continued when “they” decided to go on strike five hours before our departure, so our channel crossing was aboveground, on a ferry, and in a matter of minutes we moved from an Agatha Christie novel to a BBC television drama. Strikes are always a risk during the summer months, but the voyage to Calais was a breath of fresh air, especially when we looked back and saw the White Cliffs of Dover. Seasickness runs in my family, but though I hadn’t made provisions for this, the only motion I felt was from a vodka on the rocks.

One can never be too dressed on board, advised our pre-arrival packet, but you’re only allowed one small suitcase per guest per cabin. With that in mind, the tips offered in my book, A Traveler’s Passport to Etiquette, came in handy. All I needed was a color duo that was interchangeable for four meals. I chose black and white. The exception was the black-tie dinner (men have it so easy). I opted for a two-piece turquoise silk gown that I had made in Dubai four years ago because it was easy to pack and had an exotic feel, much like the train. My goal was to channel Michelle Pffeifer’s on-screen look in Murder on the Orient Express, but with my Mediterranean coloring, I felt more like Detective Poirot.

The Girl On The Train

Who doesn’t love a good mystery? Since I’ve read Agatha Christie ad nauseam, I chose to read James Patterson, another favorite author. His 2018 novel, The President is Missing, was coauthored by former President Clinton. If anyone knows about intrigue, it’s this President! But the cast of characters on board the train was equally intriguing: The Malibu party girls clad in mini skirts; the morality policewoman who thought they were scandalous; a guest who wore the same polo shirt to every meal (he obviously had not read the pre-arrival packet); a Miss Marple stand-in and her tag-along granddaughter; and the 80-something British boarding school twins who were having a gay old time.

The 1920s marked the Golden Age of travel and cocktails. So we decided to make ourselves at home in this car for the next 24 hours. The silvery blue upholstery and antique fixtures epitomized the glamour and elegance of this time period. The must-have cocktail for the evening was the Guilty 12, representing the 12 suspects in Agatha Christie’s plot and the train’s romantic history. It was made with 12 mysterious ingredients that no one would reveal to me. I suspect that my cocktail was laced with Irish whisky because I slept like a baby.

The Art Deco elegance on the train transported me back to a different time and place. The sublime glass panels in Dining Car 4141 are by René Lalique. These bacchanalian panels are engraved with frolicking maidens. (Similar Lalique panels were auctioned off at Christie’s in 2011, a rare happening.) Course after dinner course was served in this car till the wee hours of the morning: from caviar and lobster to beef Wellington to a palate-cleansing lemon sorbet followed by delectable cheeses, then a sweet treat of apricot cheesecake perched atop an almond and nougat biscuit. We were too satiated to sleep, but we weren’t going to miss seeing the Swiss Alps early the next morning. Our steward, Paolo (each cabin had one), works around the clock, and he promised to have espresso ready for our wake-up call.

Breakfast in bed consisted of high-octane beverages and breathtaking views. Even after lights out at 3 a.m., I was ready for our en suite viewing. The charming Swiss chalets and lush countryside were the perfect respite after our indulgent night. Sleeping Car 3482 (there were 14), built in 1929, was perfectly appointed in velvet peach tones with polished wood siding, but in our cotton pj’s and twin beds, we felt more like Lucy and Ricky in The Long, Long Trailer than the elegant guests who once lounged there in silk pajamas and marabou slippers.

After a lazy morning turned afternoon in our matching Belmond-blue robes and slippers, we were ready to explore one last car: the shopping boutique. As mementos of the journey, we purchased Lalique cufflinks that matched the dining room panels, and a Halcyon Days Battersea box with a map of the voyage to add to my 30-plus-year collection.

From the Cote d’Azur dining room to the Oriental lounge, our trip had only a few wrinkles. Travel on the Orient Express redefines the elegance of yesteryear. All parts being equal, this brief journey gave us insight to three countries without ever stepping off the train: England for its civility, France for its wine, and Italy for its relative chaos. One hour before we arrived in Italy, the staff was moving in every direction but forward, rushing to collect for bar tabs and gift items. But their warmth and vitality was the perfect introduction to the next leg of our trip: Venice, Lake Como, and Milan.

Veni, vide, vice.  I came; I saw; I conquered.  With every adventure, you get out of it what you put into it. My paternal grandfather William used to say: Don’t wait. Make your life happen, do so without regret and don’t forget to enjoy the ride. If train travel is in your future, add this museum on wheels to your list.  The Orient Express is a trip of a lifetime, every picture postcard moment worth the splurge. On this brief journey of unparalleled luxury and comfort, calories don’t count, only the experience itself. Happiness can be a two-day trip.