Is It Ok to Swap Seats on An Airplane? | Golden Rules Gal

I’m a window gal, but there are three choices of seating on an airplane: the aisle, middle, and window seat. Most passengers put a lot of thought into choosing their seats, so they might think twice if someone asks them to swap seats. It seems that whenever I fly, I spy an onboard shuffle in progress.

The decision is entirely up to you. You don’t owe an explanation for not wanting to swap but be prepared if asked. This is why it’s a good idea not to engage with other passengers, only with a flight attendant. Space on planes is small enough to make enemies, and in this age when passengers have gone wildly insane, it’s important to stay in your own lane (seat).

1. A member of the flight crew asks you to switch.

For example, you may be asked for reasons such as weight balance or if a disabled person is located in an exit row and they will not be able to assist other passengers.

2. The trade is UP, as in from a middle seat to an aisle or window.

Who in their right mind would swap for a middle seat? That’s why you plan and make sure your party gets seated together, not until you’re on the plane. If you were unsuccessful in doing this online, ask the gate agent before you board.

3. The passenger has a medical condition.

They booked a window seat not knowing of a medical condition, and now they need to be close to the restroom for health reasons.

4. The trade is equivalent to your current seat.

For example, it’s not a big imposition to move from row eight to nine in the same seat so that a passenger can sit with their friend. But if you’re seated in an exit row, chances are the trade will not be made.

5. There is a child under 12 in the exit row, which is against regulations because of safety concerns.

Children are not allowed to sit in an aisle seat because they may need to aid other passengers. 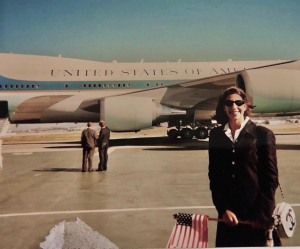 Of course, I want to sit with the president, but there is no way I would ask to trade seats on Air Force One.